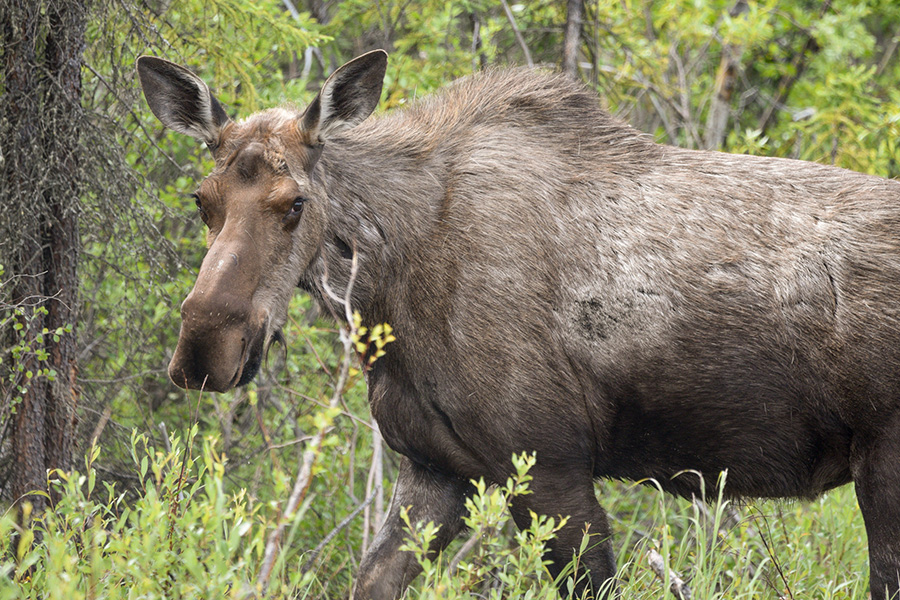 My friend Rob lived in Alaska for some years. Being an avid hiker and mountaineer, he had countless encounters with moose that are so prevalent there.

One time in the fall during rutting season, he and his friend Ed were hiking in the woods near Anchorage. They were coming down a hill toward the junction of another trail when they heard a huge crashing noise coming from the brush on their left. Out came a full-grown cow moose at a trot. More people are killed by moose every year in Alaska than by bears.

As soon as she was in the junction, she turned to look back from where she had come, and a huge bull moose emerged from the brush. His strong instincts drove him to pursue this cow, but she would have none of it. Her ears were laid back and the hair on the back of her neck was bristled with warning.

With this angry cow in the way, Rob and Ed decided to take another trail and put some distance between them and the cow. They resumed their conversation as they took the turns and twists of the trail. Eventually, the trail took them up a steep rise but just as they were nearing its crest, there was the angry cow coming up the other side directly towards them!

She was still in a bad mood, for the moment she saw them, her ears went back, the hair on her neck went up, and she charged! Rob yelled at Ed, “You take the tree to the right and I’ll go to the one on the left!” But as the two of them split, this must have confused the moose and she stopped, looking bewildered. The two hikers watched from behind their respective trees as she turned and stomped away.

Hiking in Alaska can quickly turn into an adventure. For this reason, there are a couple of cardinal rules when hiking in Alaska: Never hike alone, and always be vigilant and prepared.

In the same way, “hiking” through life can also turn into an unexpected adventure. The same two cardinal rules apply: First, don’t “hike” alone. Meet regularly with another man, a comrade in arms, to watch your back and share your struggles with. Pray with and for each other.

Second, always be vigilant and prepared. Arm yourself with the Word of God and in His strength. In life, an angry cow moose is nothing compared with our enemy the devil.

Peter warns, “Be alert and of sober mind. Your enemy the devil prowls around like a roaring lion looking for someone to devour. Resist him, standing firm in the faith, because you know that the family believers throughout the world is undergoing the same kind of sufferings.” (1 Peter 5:8-9)

Personal Application: Who is another Christian man in your life with whom you can partner spiritually? Meet with him regularly and share your joys and
challenges with each other. Pray with and for each other. To what extent are you prepared for the unexpected in life by relying on the Lord and being armed with His Word? Make this preparation a daily habit.