Priorities for a Father

Our nation continues to move toward what is known as a “fatherless society.” One-third of children are born out of wedlock; twenty-four million kids don’t live with their biological fathers half of all marriages end in divorce. Fatherlessness is a rampant and well-documented problem in this society. Children who come from fatherless homes are five times more likely to experience poverty, emotional problems, teen pregnancy, and substance abuse. Fatherless children are also more likely to drop out of high school and experience problems with the law. It’s no wonder that 85 percent of male prisoners report having had no father figure in their lives.

The popular term “NASCAR fathers” describes an approach to parenting that is all too common in modern times. The image of a race car driver roaring around the track at two hundred miles an hour, zipping into the pits for a super-quick oil change, then roaring off to rejoin the race with just a wave good-bye to those who keep him on track—this is just too close to what fatherhood looks like in many homes in America today. There is certainly a cost to the men who live this way, but the greater cost, in my opinion, is paid by the wives and children of such NASCAR fathers. A man who makes a quick “pit stop” at home, on his way between commitments and work, is not being a godly husband or father. 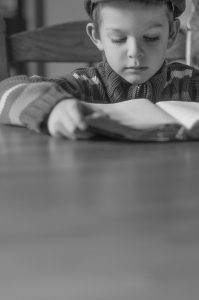 God wants men to be husbands and fathers first, and good providers second. When a man switches these priorities, he does damage to himself and to others around him.

Certainly, society is no friend to men. The media continues to play down the God-ordained leadership roles. Most sitcom television programs degrade men by portraying them as unmotivated and ignorant beings with little vision or passion for anything that is intellectual or spiritual. Men are seen as anything but complex and sophisticated.

In pondering this same issue, James, the half-brother of Jesus, said, “Pure and undefiled religion before God and the Father is this: to visit orphans and widows in their trouble, and to keep oneself unspotted from the world” James 1:27). Too many of us have been polluted by the world and are drowning in the cesspool of immorality and spiritual apathy.

Our ministry’s research indicates that, if senior pastors aren’t committed to promoting and supporting dynamic men’s programs, their churches will tend to grow slowly (if at all), and they will continually struggle with not having enough revenue to sustain their budgets. As mentioned in The Promise Keeper at Work (by Bob Horner), “When a child comes to faith, 9 percent of the time they can influence an un-churched family to become Christians. When a woman comes to faith in the same situation, only 13 percent of the time will her influence cause the family to come to faith. But when a man comes to faith, 93 percent of the time the entire family will come to faith and become participants in church.

Taken from Building a Ministry of Spiritual Mentors, by Jim Grassi