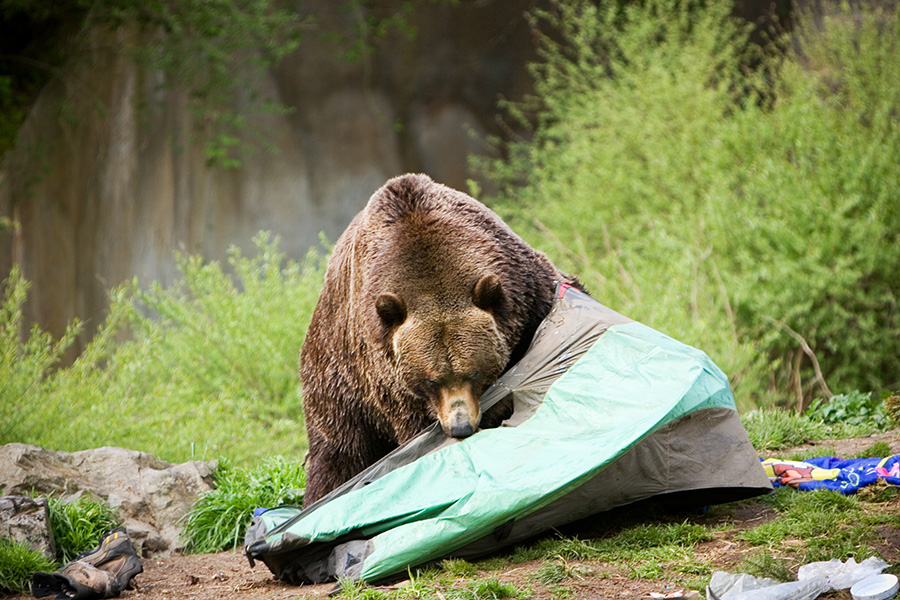 Randy had been a long-time resident of Alaska and an avid outdoorsman who loved to fish and hunt. One summer his mom came to visit him and expressed the desire to experience a true Alaskan fishing trip in the backcountry. Randy arranged for a bush pilot to take them to a remote river in the interior of Alaska. When they arrived, they set up camp and fished that afternoon and into the evening. It had been a long day, and despite the perpetual daylight of an Alaskan summer, they decided to turn in.

Sometime in the middle of the night, Randy’s mom woke him swinging Randy’s short-barreled shotgun around the tent. Frantically, she whispered that there was a bear prowling around their campsite. Randy pushed the barrel of the shotgun down and tried to assure his mom that they would be alright, and that the bear would go away.

Randy drifted off to sleep—but not for long, for the bear stepped on his elbow that was tucked into the corner of the tent. Randy awoke with a start and slid his other hand onto the 45-caliber pistol under his pillow as he prayed. The bear finally stepped away releasing his elbow. Then he told his mom, “Okay, on the count of three we’re going to grab the tent-poles and shake the tent while yelling. Hopefully, that will scare the bear away.” On the count of three, they shook the tent and yelled. Then, they stopped and listened with all their senses on high alert. Suddenly, the bear swiped at the flimsy fabric of the tent slicing a gaping hole in it, bringing it down on Randy and his mom! Then they could see the bear wander off into the brush.

In a commanding voice Randy told her, “Grab the gun and your sleeping bag and come with me.” They both scrambled from the ripped tent and headed for the two porta-potties that were chained together at the campsite. They barely got into one of the units and closed the door when the bear was upon them, pushing on all exposed sides of the porta-potty trying to get in. Eventually, the bear sauntered off and then they could hear it trashing their gear. After a fitful and frightful night’s sleep in the john, they peeked outside and determined that the grizzly bear was gone. But when they got to their campsite, the bear had chewed and demolished every piece of equipment they had—nothing was salvageable! There was nothing more to do but call the bush pilot on his satellite phone and ask for him to pick them up. Their fishing trip was a bust, but memorable none-the-less, and they were thankful to be able to walk away alive! Randy’s experience drew him closer to the Lord and highlighted his need to trust Him always. There are times for all of us when, despite our plans, everything goes wrong. It’s times like those, however, when we recognize the sovereign hand of God protecting and guiding us.

Personal Application: Commit today and each day to the Lord and trust Him with your safety and all your needs.