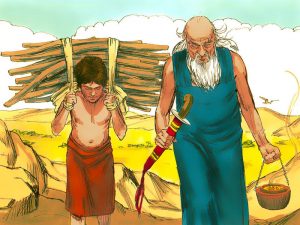 “When they reached the place God had told him about, Abraham built an altar there and arranged the wood on it. He bound his son Isaac and laid him on the altar, on top of the wood.” Genesis 22:9

In a time when many people do not keep their promises, I’m so thankful that our God keeps His promises. Aren’t we glad God doesn’t tell us one thing and do another? He doesn’t string us along. We can trust Him, because He represents ultimate truth.

Most readers of these devotionals are familiar with the story of how Abraham, in faith, trusted God with the life of his son Isaac. God’s promise was fulfilled when Isaac was born to the aged Abraham and Sarah. The name Isaac means “he laughs”. And Isaac became the joy of his parents. In addition to being a hard working person, Isaac mimicked his dad’s faith and held fast to his teachings about God’s word.

Like his father Abraham, Isaac obeyed instructions – even to the point of crawling up onto the wooden altar to be a living sacrifice to God Almighty. He could have run from his dad. He could have argued with his father. But no, he trusted his dad to do the right thing.

Just as Abraham raised the knife to plunge it into the boy’s heart, he suddenly heard from God, “Abraham, Abraham!..Do not lay a hand on the boy” (Genesis 22:11-12) Wow, what a relief for both father and son. I have to believe that Abraham and Isaac stood there in joyous embrace.

Isaac stands along with Abraham as the heroes of this story. Do you know why Isaac would get up on that altar? Because he had been trained by his dad to trust and obey. He had learned that when his dad said, “God himself will provide” (Genesis 22:8), he meant it. So this son of Abraham was ready to trust God and to give his life in order to remain faithful.

How are we doing about trusting and remaining faithful to the truth God has given us? Would you be willing to die for your convictions? Several in our military and missionaries all over the world have been willing to “give-it-all” for our freedoms and to promote the gospel.

It is interesting to note that the approximate spot where Abraham was going to sacrifice his son (Mount Moriah) later became known as Calvary. It was near this spot that God Himself did what He had earlier asked Abraham to do. Here God the Father willingly released Jesus Christ, His one and only Son, to be the once-for-all sacrifice for the sins of humanity. Praise God!

In a world that challenges our faith, let us remember the words from the Prophet Isaiah, “But now, this is what the Lord says— he who created you, O Jacob, he who formed you, O Israel: Fear not, for I have redeemed you; I have summoned you by name; you are mine.” (Isaiah 43:1) My dear friends, we have been bought with the precious blood of Jesus. Let us live a life that glorifies our Heavenly Father and honors all godly men in our lives.

May we appreciate the heritage we have and those mentors who teach us to continually trust and obey. The great hymn writer John Sammis wrote:“When we walk with the Lord in the light of His Word, What a glory He sheds on our way! While we do His good will He abides with us still, And with all who will trust and obey. Trust and obey, for there’s no other way, To be happy in Jesus, but to trust and obey.”

Personal Application:
Do you embrace God’s redeeming gift of His Son? What does it mean to you to have the gift of salvation and “amazing grace”?

Have you accepted the unmerited favor He has given you through the blood His Son shed on the Cross?

Who can you share your testimony with this week? Please pass this email along to your friends.