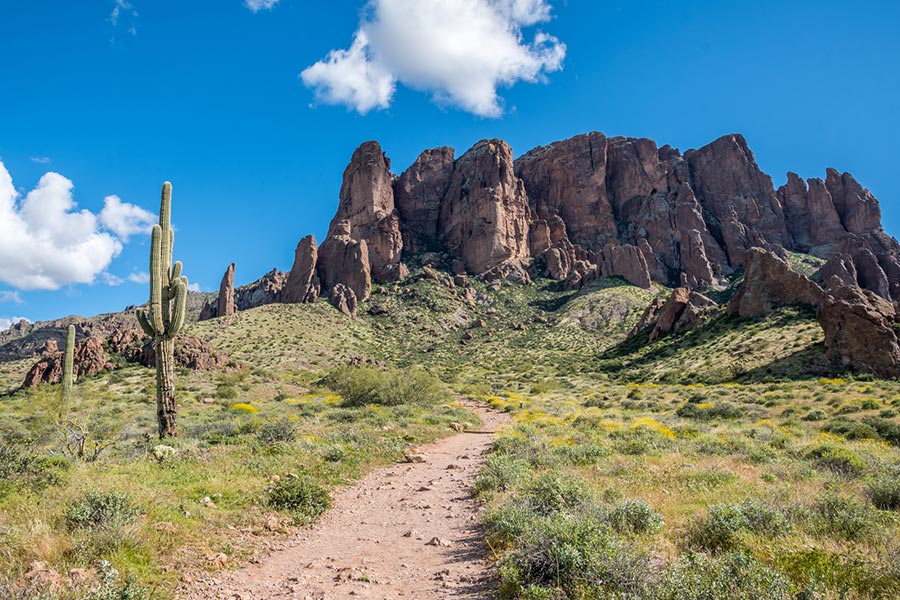 My friend Rob is an avid hiker. He and his son, Jason, planned an early morning hike a few years ago in the Superstition Mountains northeast of Phoenix, AZ. It was a nine-mile loop with only 1,000 feet of elevation gain. Normally, they would’ve been able to complete the hike in three hours: at the trail head by 6am and out by 9am.

But due to unforeseeable events, they couldn’t begin their hike until mid-morning. Neither of them had ever hiked this trail and theirs was the only vehicle at this remote trail head, and there was no cell service. The trail head was nicely developed, but the farther they got from the trail head, the more primitive and scant the trail became.

Finally, with no visible trail and spending too much time trying to identify a trail, they were five-to-six miles into the loop. It was 105° and they were running low on water. It would’ve been shorter to keep going, but there was no trail! The map they had with them was useless. Their only recourse was to backtrack. But soon, both began feeling the onset of hyponatremia — too low sodium. This condition can be deadly within a few hours.

Both were suffering horribly. Every muscle in Rob’s legs was cramping violently and their depleted electrolytes rendered them weak and disoriented. The sun was relentless. They knew they were in a bad way and nearer death than they’d ever been.

Mercifully, they finally made it back to the car. It was now late afternoon. They stopped at a drugstore and sat in the air conditioned store for 45 minutes trying to replenish their electrolytes. When they left, they needed to stop for gas. On the way to the gas station, they saw a young man walking along the road with a white garbage bag of clothes slung over his shoulder. Rob remembers feeling sorry for the guy out there in that relentless heat.

They stopped for gas and Rob went in to buy a couple of bananas. When he got back to the car, the young man they had seen was asking Jason for a ride. They agreed to give the guy a lift, but Rob silently prayed, “God, please don’t ask me to witness to him. I don’t have the strength.”

But Rob and Jason looked so bad, Rob felt he owed the young man an explanation. Then, the young man poured out his life story to them. He had just gotten out of prison that day after two years. His life was a wreck. All he owned was in that garbage bag. They were driving him to his girlfriend’s house. He hoped she would take him in.

At this, Rob relented and shared the Gospel of Jesus Christ with this young man. When they arrived at the man’s destination, Rob prayed with him and the guy wept uncontrollably. When they drove away, Rob and Jason looked at each other totally awe-struck by God’s split-second timing in the day’s events! God truly works all things together for good for those who trust Him!

What is it about this story that impacts you most? How is the Lord speaking to you through it?