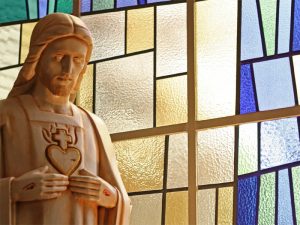 The Apostle Luke records for us some of the last thoughts Jesus expressed prior to His crucifixion.  As the soldiers were placing Him upon The Cross between two convicted thieves, Jesus looked at the His persecutors and mockers and said, “Father forgive them; for they do not know what they are doing.” (Luke 23:24)

During the course of my years in ministry I‘ve had the privilege of guiding several business leader groups through a variety of studies including: Finishing Well – Finishing Strong and Man and the Mirror.  The purpose of the groups has been: To help key business leaders explore a new vision for the remaining part of their lives and to challenge them with biblical truths that helps to transform their goals from being just successful to also being significant.”

It has been interesting to see the growth in each man as they apply biblical values to their homes, communities, and businesses.  In our sessions, we often repeated two words that described the purpose of The Cross – forgiveness and grace.  Today, I read the book of Galatians and it again reminded me to be thankful we are not under the law, but that we have access to Christ through the atoning blood He shed on Calvary’s Cross.

During this season of Thanksgiving, let’s be sure to give thanks to God for His Son and the gift of salvation. “But the Scripture declares that the whole world is a prisoner of sin, so that what was promised, being given through faith in Jesus Christ, might be given to those who believe. So, the law was put in charge to lead us to Christ that we might be justified by faith. Now that faith has come, we are no longer under the supervision of the law.” (Galatians 3:22, 24-25)

This little story reminds us of our suffering Savior:

A young lady named Sally relates an experience she had in a seminary class given by her teacher, Dr. Jones. She says Dr. Jones was known for his elaborate and effective object lessons.  One particular day, Sally walked into the seminary class and she immediately knew they were in for a fun day. On the wall was a big target and on a nearby table were many darts.  Dr. Jones told the students to draw a picture of someone they disliked or someone who had made them angry, and he would allow them to throw darts at the person’s picture.

The class lined up and began throwing darts. Some of the students threw their darts with such force that their targets were ripping apart. Sally looked forward to her turn, and was filled with disappointment when Dr. Jones, because of time limits, asked the students to return to their seats.

As Sally sat thinking about how angry she was because she didn’t have a chance to throw any darts at her target, Dr. Jones began removing the target from the wall.  Underneath the target was a picture of Jesus. A hush fell over the room as each student viewed the mangled picture of Jesus; holes and jagged marks covered His face and His eyes were pierced.

No other words were necessary; the tear filled eyes of the students focused only on the picture of Christ.