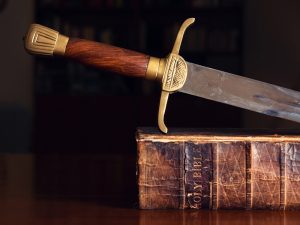 Memorial Day is a precious time to celebrate the sacrifices of those who have defended this great country.  Every American owes a debt of gratitude to the women and men who bravely serve(d) in our military to defend our rights and protect our land.

Too often we take for granted the freedom that is ours.  We forget about the rich spiritual heritage that came from the sacrifices of others. I really care about and love people in our military.  So, if this devotional is a little longer than normal you will understand my passion.

One of the most highly acclaimed movies in the past decade was Braveheart.  Mel Gibson played the valiant warrior William Wallace.  He rallied the hearts of the common man who was not previously involved with over-throwing the invaders.  The invaders represented what was dark and evil in that day.

Many of the locals previously just sat quietly on the sidelines accepting the will of the aggressors. Wallace challenged his fellow countryman to get off of the sides lines and into the battle.   He wanted them to become participants, not just spectators, in the cause that was before them.

At the end of the movie, Wallace spoke encouragement to his hesitant and poorly equipped men.  While riding his big white stallion up and down the front lines, he challenged his men to defend their honor and homeland.  His words pierced the hearts and passions of these reluctant warriors.  He made his point with the words, “What are we going to do with our freedom?”  Another way of putting it, “Are you willing to fight for the freedom that is yours?”

And so it is today, some timid men sit on the sidelines in their homes or in their churches.  The battle for the souls of their families and the moral fabric of this country is escalating.  The pornographers, liars, cheats, and morally corrupt media blast its message of despair and decadence.  Are we to sit on the sidelines or to become involved?

We have the freedom of our salvation, but we also have the responsibility of advancing the Kingdom of God, especially in our homes and schools, which is too often left to busy mothers.

The Apostle Paul reminded us, “And we urge you, brothers, warn those who are idle, encourage the timid, help the weak, and be patient with everyone.” 1 Thessalonians 5:14

Unfortunately, sin entered into the world because a man was idly standing by “watching” instead of protecting and leading.  The pressures of modern life and the lack of awareness among some men have created a vacuum of male leadership in the home and church.  Rather than take on the spiritual leadership that is rightfully theirs, it has been more comfortable for some men to unplug and “let mom do it.”

Barna Research tells us that passive men are setting the stage for their children to have sexual identity issues and present problems with teen pregnancy.  Men afraid of standing up to their overly-dominant wives lack respect from their family, friends, and community.  Most importantly, they are helping to create a generation of like-minded, uncommitted men who will flounder with decision making.

Dads need to be strong, determined leaders who are compassionate and loving.  They need to take on the biblical mandate to lead their families and not sit by as timid spectators.

God’s word tells us, “For God did not give us a spirit of timidity, but a spirit of power, of love and of self-discipline.” 2 Timothy 1:7 Scripture also warns us, “From the days of John the Baptist until now, the kingdom of heaven has been forcefully advancing, and forceful men lay hold of it.” Matthew 11:12

My friends, as we journey through life we must constantly ask ourselves, “are we participants or spectators?”  Are we really committed to being men of God or are we going to join the majority of guys sitting on the side lines?

Thank God that the brave service men and women remembered on this Memorial Day were not spectators.  They were and are defenders of “one nation under God.”

What can you do to be better protectors of our homes, churches, and nation?

Next time you see someone in uniform go up and shake their hand and tell them you appreciate their serving our country and our God.  Amen