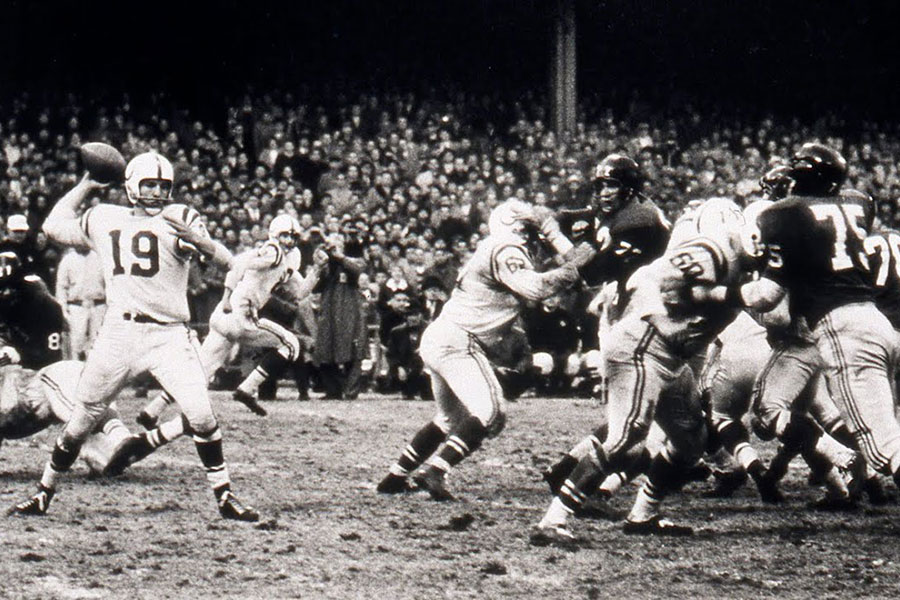 In December 1958, the powerful New York Giants clashed with the Baltimore Colts and a young quarterback, Johnny Unitas, pushing the game into the NFL’s first-ever overtime. What a game that was!

Ironically, Johnny U. had been cut from the Steelers in 1955, because he was “too small and too slow.” Eventually the Colts offered him a try-out and signed the skinny rookie for a backup quarterback position. When the starting quarterback broke his knee during the fourth game of the 1956 season, the door opened for Johnny to do his thing.

Unitas went on to set many team records in the following years, including throwing at least one touchdown pass in 47 consecutive games, setting a record that held for 52 years! Then, before a roaring crowd of more than 64,000 in Yankee Stadium, on that cold December afternoon, Unitas led the Colts to a thrilling “come from behind” victory — 23 to 17. The ebb and flow of the game kept the fans on the edge of their seats the entire game. It seemed like that finicky invisible player called “Big Mo”, AKA momentum, couldn’t seem to pick a favorite team. It was perhaps the most exciting football game ever played!

Most coaches will tell you that embracing momentum can mean the difference between victory and defeat. Many things build momentum during a game. Whether it’s a ball bouncing your way, a marquee player making a spectacular play, or a little-known player stepping up and playing the game of his life, when the spectacular happens play after play, team excitement builds and confidence soars. Hearts pound and players play with more enthusiasm and abandonment.

In a similar manner, the Holy Spirit empowers a Christian. Through the Spirit, God gives believers all the spiritual power they will ever need to live a victorious Christian life. When the Spirit enters the life of a new believer, new strength, courage, and godly wisdom is available, allowing him to serve others, grow in the knowledge of God, and boldly speak truth.

The Apostle Paul encouraged believers to lean on the resources and power of the Holy Spirit. Paul was regularly challenged physically, emotionally, and spiritually, yet he drew strength and momentum, as well as peace and comfort, from this invisible player: “We are afflicted in every way, but not crushed; perplexed, but not despairing; persecuted, but not forsaken; struck down, but not destroyed.” (2 Corinthians 4:8–9)

Like the Big Mo, the Holy Spirit can empower us and give us the victory — over fear, frustrations, failures, threats, temptations, or even sickness. Unlike Big Mo — whether you’re a super star player or a skinny rookie — God’s Comforter remains faithful and constant, true to the end.