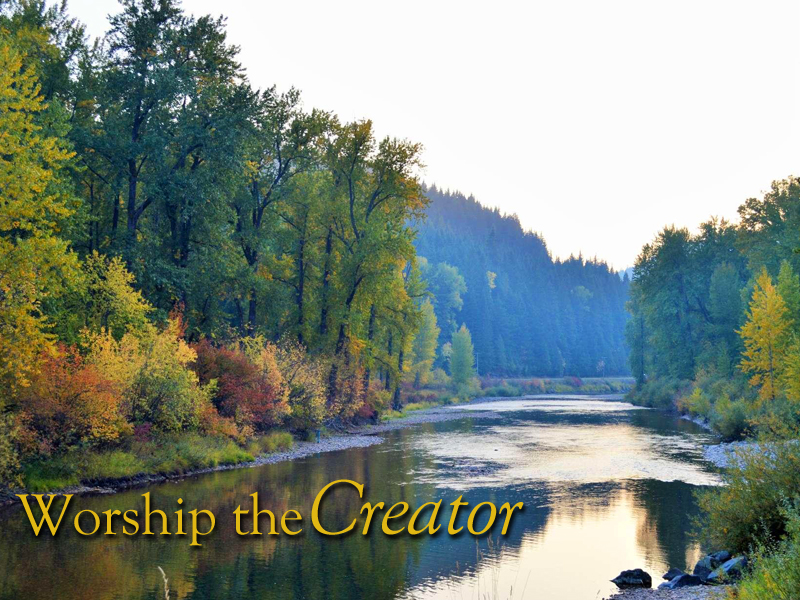 I rejoice in the fact we live in such a beautiful setting.  Scores of magazines and newspapers have commented on the fact that the Coeur d’ Alene area is one of the prettiest regions in our nation.  And yet there are some who don’t appreciate this pristine environment as one of God’s masterpieces.

Scripture reminds us, “For since the creation of the world God’s invisible qualities—his eternal power and divine nature—have been clearly seen, being understood from what has been made, so that men are without excuse.” Romans 1:20

The power of God is seen in the expanse of the universe and beyond.  We see His authority over creation in the thunder of the waterfall and in the mystery of a lightning storm.  To those who spend any time in the woods, desert, or jungle there is an appreciation for the unique environment and majesty of the wild animals. There is a wonder about His creation.

During the time of Moses, Pharaoh considered himself to be all powerful and worthy of worship.  He was unmoved by the words of Moses and Aaron.  After all, the God of a nation of slaves obviously could not be very powerful – so he thought.

Pharaoh, like many people caught up in their own prominence, said, “Who is the Lord?  Why should I listen to him?” (Ex. 5:2).  God had anticipated the question and had already revealed His plan to Moses. God would take on the self-described all powerful Pharaoh by proving that this leader was not as powerful as he thought.

Through many miracles, God showed that He is the One, all-powerful God.  “Moses replied, “When I have gone out of the city, I will spread out my hands in prayer to the Lord. The thunder will stop and there will be no more hail, so you may know that the earth is the Lord’s. But I know that you and your officials still do not fear the Lord God.” Exodus 9:29-30 Unfortunately, we still have those doubters and pride souls who do not fear God.

King David often mused about the power of the Almighty and the importance of keeping a good perspective about his own influence.  In Psalms 24 we read, “The earth is the Lord’s, and everything in it, the world, and all who live in it; for he founded it upon the seas and established it upon the waters. Who may ascend the hill of the Lord? Who may stand in his holy place? He who has clean hands and a pure heart, who does not lift-up his soul to an idol or swear by what is false. He will receive blessing from the Lord and vindication from God his Savior.” Psalm 24:1-5

Sometimes, while out fishing or hunting in the woods, I will run into people who worship the creation and not the Creator.  The Apostle Paul reminds us that, “They exchanged the truth of God for a lie, and worshiped and served created things rather than the Creator—who is forever praised. Amen.” Romans 1:25

Having a personal relationship with God is the most important thing anyone can do. Experiencing God is not about church attendance, or carrying a big Bible to church, or even seeking out good character. No, having a fulfilled life is about knowing God on a personal level.  When we seek His presence and power in our daily living we can be conquers like Moses.  As we know Him we can appreciate the many gifts He has given us.  Praise God!

What are the evidences you see that testify to God’s power and greatness?

When do you feel most close to God?  How does He manifest His truth to you?