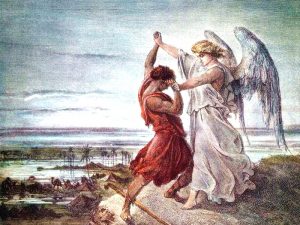 It seems like conflict is always with us, especially within unsettled and unforgiving families.  Jacob, the son of Isaac and grandson of Abraham, had many conflicts throughout his life that seemed to follow him wherever he went.

In Genesis 31, we read the account of Jacob leaving his father-in-law’s (Laban) oppressive  environment as he travelled back to his place of birth.  Jacob had a disagreement with his father-in-law and desired to seek out a new location to raise his large family.

Jacob had two problems: the father-in-law who was outraged about how and when Jacob departed and the brother from whom he had stolen both inheritance and blessing.  Both men confronted Jacob in the middle of the desert.

After dealing with his angry father-in-law, his irate brother Esau appears on the scene.  This would be the first time in twenty-years the two brothers had seen each other.  Jacob would come face-to-face with a brother who had reason to carry a big grudge and who had vowed to seek revenge.

Knowing that his irritated brother was closing in on him, Jacob considered the options before him – he could have had his brother ambushed and killed; he could have run for another land; he could have prepared his men for battle; or he could have trusted the promises God gave him.  In his earlier days, Jacob might have chosen one of the first three options.  Instead, after years of personal growth, Jacob dealt with this crisis by going to the ultimate Problem Solver – the Great I AM – God.  He humbly confessed his unworthiness, but then asked to be rescued, claiming the promises of God.

“Then Jacob prayed, ‘O God of my father Abraham, God of my father Isaac, O Lord, who said to me, Go back to your country and your relatives, and I will make you prosper, I am unworthy of all the kindness and faithfulness you have shown your servant. I had only my staff when I crossed this Jordan, but now I have become two groups. Save me, I pray, from the hand of my brother Esau, for I am afraid he will come and attack me, and also the mothers with their children. But you have said, I will surely make you prosper and will make your descendants like the sand of the sea, which cannot be counted.’ ” Genesis 32:9-12 (NIV)

God desires such humility from His followers. When we turn to Him with our problems, He delights to surprise us with an outcome or answer that we couldn’t have imagined in our wildest dreams.

Let us pray that our nation will do as Jacob taught us to do.  “Now fear the Lord and serve him with all faithfulness. Throw away the gods your forefathers worshiped beyond the River and in Egypt, and serve the Lord. But if serving the Lord seems undesirable to you, then choose for yourselves this day whom you will serve, whether the gods your forefathers served beyond the River, or the gods of the Amorites, in whose land you are living. But as for me and my household, we will serve the Lord.” Joshua 24:14-15

Who are you serving?  In a culture that seems to project that we “never have enough” or “never are being enough”, how can you take a stand for Jesus?

Are we looking for opportunities to provide wisdom and guidance to the younger generation in a method and language they understand?

When was the last time you had an informal conversation with a young person?  What are they feeling, hearing, saying, and doing?  Are they relying on their own “cleverness,” or on the wisdom and promises of God?