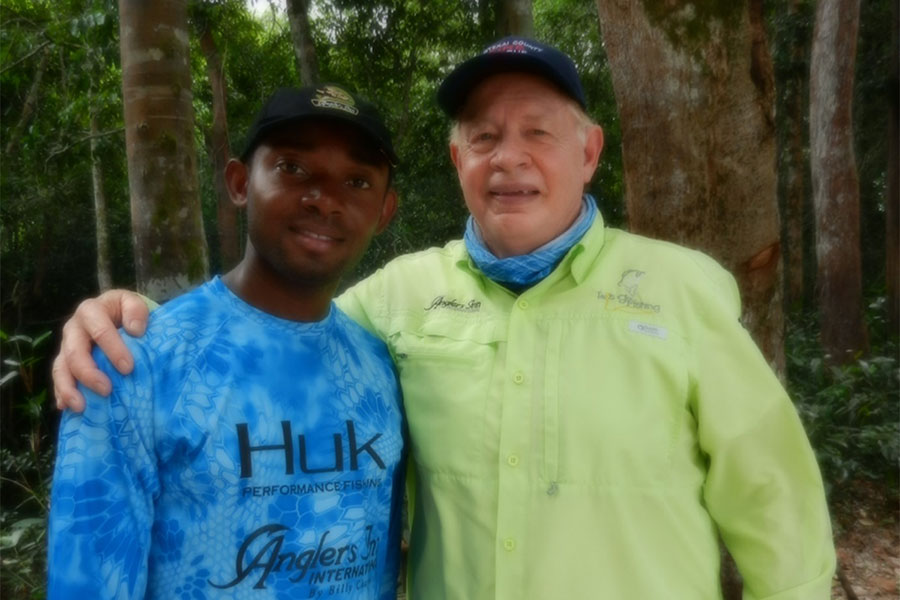 Recently, I met a young man whose life typifies one of the greatest militaries and spiritual leaders of the Old Testament, Joshua the son of Nun. Guyvenson Montes was an orphan boy raised by his grandmother on the island of Haiti. His grandmother saw to it that he got a good education and regularly went to church. It was there he learned about the “servant’s heart” that our Lord had. It was in church that the unique personality of Guyvenson took on the humble character of a Joshua.

Eventually, Guyvenson married and had two children and enjoyed a good job. Life was going well for Guyvenson and his family until the Category 5 Hurricane Matthew hit the small island in October 2016, leaving in its devastating path an impoverished nation. The hurricane nearly or completely destroyed around 200,000 homes, leaving 1.4 million people in need of humanitarian aid. Monetary damage was estimated at US$1.9 billion. Nearly complete crop damage occurred, and communications were wiped out. What limited aid came to the Haitians, after the government grabbed most of the aid and sold it in the black-market, there was not enough for Guyvenson to support his family.

After standing in line over 200 days in a row to get a visa to a country where he could make a living, Guyvenson was granted a work permit to Brazil. It was there he worked around the clock as a waiter in one of the nice hotels. He saved every dollar he could to help bring the rest of his family to join him.

My good friend and businessman, Billy Chapman, spotted this young man and was absolutely amazed at his “servant’s heart.” While staying in Brazil, Billy enjoyed several meals with Guyvenson as his waiter. The young man anticipated every customer’s need before they imagined their request. He moved so fast to respond to guests that Billy nicknamed him “Flash” and would eventually hire him for his amazing Amazon Anglers Inn Operation. And Guyvenson continues to display his servant-leadership.

Leadership can be conveyed in many ways. Today, it seems that those who are most bullish, abrupt, impulsive, dynamic, and charismatic find their way into the news. To some, their mannerisms define what it means to be a powerful leader. But as we know, there are many kinds of leaders. It is interesting to note that both Moses and Joshua his successor are seen by God to be inspired leaders. Remember, Joshua was on the mountain when Moses received the Law (Exod. 32:17). He was also one of the 12 spies Moses sent to investigate Canaan (Num. 13:8). He and Caleb returned with a positive, minority report. Of all the adults alive at that time, only the two of them were allowed to enter the land of Canaan (Num. 14:28–30, 38).

One Bible commentator points out that the Lord selected Joshua to be Moses’ successor long before Moses’ death (Num. 27:15–23; Deut. 31:14–15, 23; 34:9). Joshua was a military leader, a political leader, and a spiritual leader. He was quiet and unassuming, but he was not intimidated by his responsibilities or the task that lay before him. He was a battlefield genius, particularly in the areas of careful planning, strategy, and execution. He was a capable administrator for the nation, effective in maintaining harmony among people and groups. He was a spokesman to the people for the Lord. Though he did not receive the Law as Moses had, he communicated the Lord’s will and the Lord’s message much like Moses. God showed Israel that, just as he had been with Moses, He was now with Joshua. It was the continuity of leadership that God had promised. The spirit that had been upon Moses was now upon Joshua — and the people saw it! He was Moses’ servant before, but now he is exalted before the people by God’s authority which rests upon him. In this leadership position, all he did was direct the people to look to the ark and to follow it!

Look to Jesus! Look to Jesus! Follow him. He will lead you through to victory! That is all a leader must do — point the way to Jesus Christ! Over and over again we see Joshua faithfully carrying out his orders. The focus here again shows the importance of strict obedience to God’s Word and the exemplary nature of Joshua as Israel’s leader, a worthy successor to Moses. And how will Joshua be remembered?

In the book of Joshua, we read: “Now it came to pass after these things that Joshua the son of Nun, the servant of the LORD, died, being one hundred and ten years old. And they buried him within the border of his inheritance at Timnath Serah, which is in the mountains of Ephraim, on the north side of Mount Gaash.”

What a great obituary! He died and will be remembered as a great servant of the Lord. Just like Joshua, Flash has that servant’s heart. While he is a very meek man, his testimony speaks louder than those bullish leaders we see on the six-o’clock news. His actions speak volumes of his love for Christ and how he wishes to mimic the meekness that Christ and Joshua demonstrated in their lives.

Flash has worked hard to pull the remainder of his family through the corrupt governmental system in Haiti, so they can enjoy the rewards of a life well lived. He only has his little daughter left in Haiti. Please pray that the government will release her to join her family.

How do you demonstrate a servant’s heart to others? Are you willing to serve without expecting a reward, recognition, or benefit?

What are the subtle things you can do to enhance the life of someone serving you? Next time you are in a restaurant, getting gas for your automobile, checking out at the grocery store, or chatting with the nurse at your doctor’s office — give them a word of encouragement about their service.

Like the rest of the Old Testament Scriptures, the book of Joshua was written both to warn us (1 Cor. 10:11) and to encourage us (Rom. 15:4). Therefore, we ought to take time to review Joshua’s life and ministry and learn from him lessons that will help us know the Lord better and serve Him more effectively.