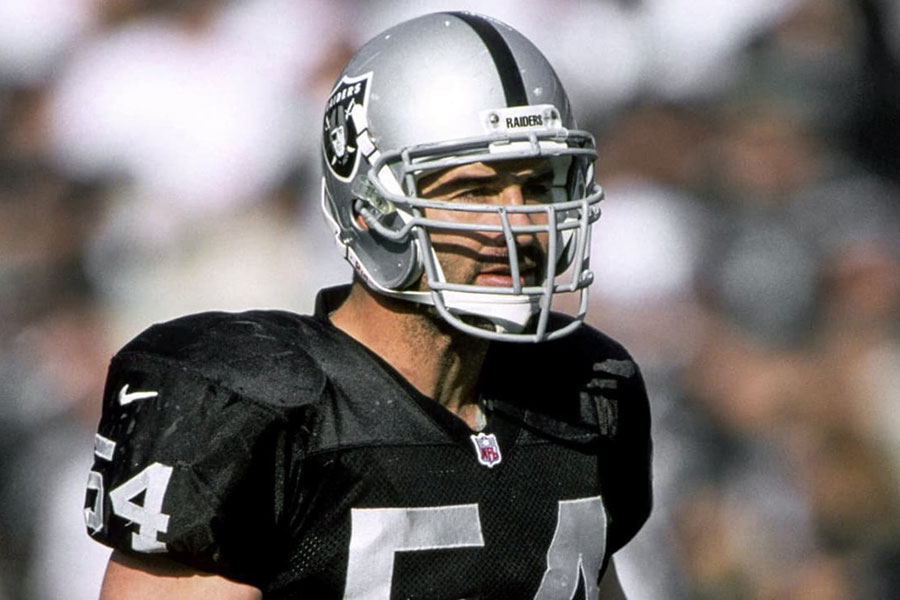 Few words can intimidate an NFL quarterback like the word “blitz.” Blitzing is a defensive tactic to prevent the offense from passing or having an effective run. During a blitz, there’s a higher than usual number of defensive players on the line ready to rush the opposition’s quarterback, either to tackle the quarterback or force him to blunder any pass or running attempts.

Whatever the offensive or defensive scheme the linebacker must provide a triple threat. He has to be quick, tough, and strong, and have great vision and great intuition. A good linebacker knows that every offensive alignment brings a certain strength and weakness. Depending on the defensive formation they can either over-play the opponent’s strength or prey upon their weakness.

The enduring middle linebacker for the Oakland Raiders was one such player — Greg “Beek” Biekert. In 2000 he led his team in tackles for the third straight season, with 126. After playing for four years at Colorado State, he was voted MVP as a senior and received All American Honorable Mention for his insightful playing.

As I have interviewed running backs who’ve run against “Beek” they testify to his toughness, declaring, “Hitting Greg is like running up against a rock wall! His feet don’t move; he’s planted!” According to Defensive Line Coach Mike Waufle and Fullback John Ritchie, “Beek can cause you more problems in the preparation of an offensive game plan than almost any other player. A tough, mobile middle linebacker like Beek can produce a lot of sleepless nights for Offensive Coordinators.”

One of Biekert’s role models both on and off the field was the legendary Mike Singletary. Former Bear coach Mike Ditka, a real believer in tough linebackers, once asked Singletary, “When’s the last time you broke a helmet?” When Singletary replied it had been a while, Ditka challenged him, “I want to hear one break.” While playing at Baylor University, Singletary broke 16 helmets — all of them his own!

As followers of Christ, we too are to play tough. “Be strong in the Lord and in His mighty power. Put on the full armor of God, so that you can take your stand against the devil’s schemes.” (Ephesians 6:10–11) The devil schemes to tempt us, deceive us, and accuse us. “Stand firm then!” (Ephesians 6:14)

Meditate on the above passage and each of the pieces of “armor.” Focus on one piece of armor that the Lord impresses you with and take measures to ensure you’ve got it on.